A simple wooden memorial cross marks the field outside Ploegsteert Wood, Flanders, where British and German soldiers played football during the World War One Christmas Day truce in 1914.

A charity song commemorating the football match truce during World War One is to take on the X Factor winner for the Christmas number one.

The cover of The Farm’s Altogether Now is from the team behind the 2012 Hillsborough charity single.

The 1990 hit was inspired by the unofficial truce on Christmas Day 1914, when British and German soldiers left the trenches to play football.

Performers on the track include Suggs, Gabrielle and Holly Johnson.

The song has been recorded by the Peace Collective, which also features The Farm’s Peter Hooton, Mick Jones from The Clash and The Proclaimers.

Two years ago, the group – then called The Justice Collective – beat the X Factor winner James Arthur to the Christmas number one with a cover of He Ain’t Heavy He’s My Brother, raising awareness of the Hillsborough Tragedy. 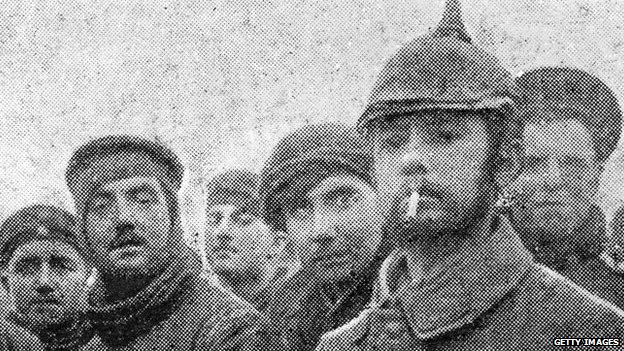 Late on Christmas Eve 1914, men of the British Expeditionary Force heard the Germans singing carols and patriotic songs and saw lanterns and small fir trees along their trenches.

Messages began to be shouted between the trenches. The following day, British and German soldiers met in No Man’s Land and exchanged gifts, took photographs and some played football. They also buried casualties and repaired trenches and dugouts.