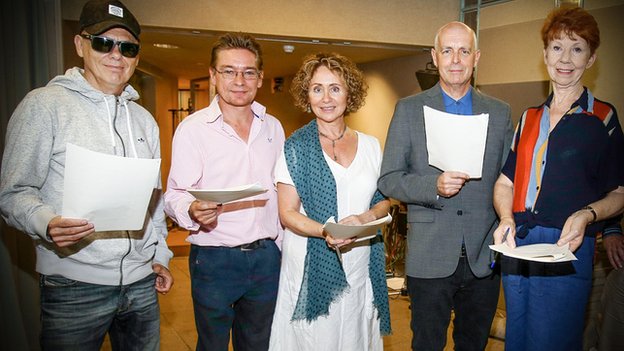 Ambridge is to get a dose of pop star royalty after it was revealed that pop duo Pet Shop Boys are to make a cameo appearance on Radio 4’s The Archers.

Listeners found out on Friday that Neil Tennant and Chris Lowe’s band had been lined up as last-minute headliners for fictional music festival Loxfest.

“It’s a thrill for us to enter the world of The Archers, the UK’s most famous radio drama,” the pair said.

Pet Shop Boys will appear in Monday’s instalment of the rural drama series.

The chart-topping duo, whose hits include It’s a Sin and West End Girls, recorded their contribution at the BBC’s Maida Vale Studios in London last month.

“We’re completely thrilled to have secured an iconic British act to headline for us,” said Sean O’Connor, editor of The Archers.

BBC 6 Music’s Steve Lamacq will also appear on Monday, having helped the Archers team put together the Loxfest line-up.

“Loxfest is The Archers storyline we’ve been waiting for,” said the self-confessed Archers fan.

“As someone who spends a lot of time covering festivals for the BBC, it was one we really wanted to be involved with.”

Tennant, Lowe and Lamacq are among a number of high-profile figures to have turned up in Ambridge in recent years.

The Duchess of Cornwall made an appearance on the show in 2011, while cyclist Sir Bradley Wiggins had a cameo in March this year.

MTV Movie Awards: All you need to know