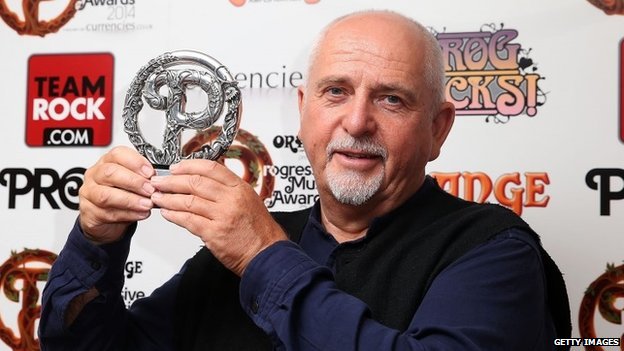 Peter Gabriel has been honoured at the annual Progressive Music Awards for a music career that has spanned five decades.

The former Genesis singer picked up the “prog god” award at the event at Shakespeare’s Globe in London.

The ceremony, now in its third year, was hosted by BBC news presenter and prog rock fan Gavin Esler.

After receiving his award from comedian Bill Bailey, Gabriel said: “Despite prog probably being the most derided musical genre of all time there were – as today – a lot of extraordinary musicians trying to break down the barriers to reject the rules of music.”

He told the BBC backstage that he was “a lot more comfortable” with the prog label now than earlier in his career.

“It was genuinely pioneering at time. We didn’t always get it right, but when it did work we could move people and get some magic happening.

“I see it all as a very healthy part of growing up.”

Gabriel, who left Genesis in 1975, enjoyed massive commercial success as a solo artist with his 1986 album, So, which featured the hit singles Sledgehammer and Don’t Give Up.

To mark the album’s 25th anniversary he has been on a two-year Back To Front tour – ending in December 2014 – which features many of the musicians who played on the original recording.

A well-known human rights activist, Gabriel was behind OD2, one of the first online music download services, and co-founded of the world music festival Womad.

'What does Thriller mean?'

Elizabeth I Armada portrait saved with help of...