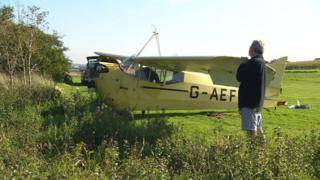 Plane landed in Cornwall after propeller fell off

The plane landed at Point at Polzeath Club, a country club with a golf course

A pilot was forced to make an emergency landing when a propeller fell from his 80-year-old plane at 2,500ft (762m), an accident report has found.

Nick Chitterdon, 46, landed next to a golf course near Polzeath in October 2015, and escaped uninjured.

He was the only person on the Aeronca C3, a light plane built in the US in 1936.

The Air Accidents Investigation Branch (AAIB) said problems with part of that model were first recognised in 1939.

The pilot, who was unnamed in the report, made a distress call to Newquay Airport before finding a landing strip.

There was “a loud bang” and then “the pilot …read more

Beagle 2 'was so close to Mars success'