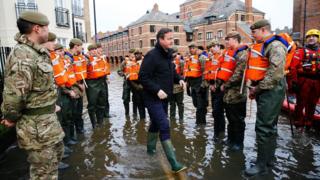 Flood defences “overwhelmed” by recent record rainfall will be fixed and bolstered in a £40m package of spending, the prime minister has said.

Thousands of homes across northern England were hit by flooding after Storm Eva hit on Boxing Day.

The £40m package for Yorkshire comes on top of £50m funding to help local authorities’ response to the floods.

Liberal Democrat leader Tim Farron has accused David Cameron of providing only a “short-term fix” for the problem.

And the leader of Leeds …read more