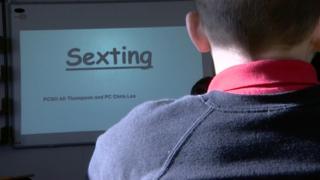 West Mercia Police said it investigated 74 people aged between 10 and 17 in 2015 over explicit messages, some containing naked images.

Officers say people need to be aware of the dangers of being prosecuted for sharing indecent messages.

Sexting can lead to anyone convicted being put on the sex offenders register.

The warnings come ahead of Safer Internet Day, on 9 February which urges young people to avoid sharing material online that could be used against …read more