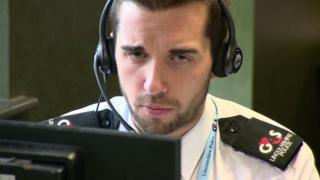 Three police forces who looked at handing over their 999 control rooms to the private sector have decided not to go ahead with a deal.

Police in Leicestershire, Nottinghamshire and Northamptonshire will instead form a “strategic alliance” to coordinate their work.

A spokesman for the Unison union said the decision was “good news for our members and the public”.

A police spokesman from Northamptonshire said “a decision was made not to progress any further work by G4S across the three forces in this area”.