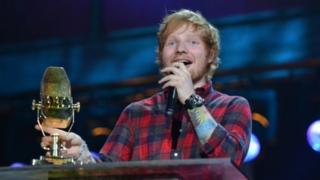 Ed Sheeran, Ellie Goulding and Jason Derulo are all in the running for song of the year at the BBC Music Awards.

Their tracks, Bloodstream, Love Me Like You Do and Want To Want Me are among 10 nominations to be announced ahead of the awards in Birmingham on Thursday.

Other songs in the running include Jess Glynne’s Hold My Hand and Uptown Funk by Mark Ronson featuring Bruno Mars.

Out of the five awards at this year’s event, song of the year is the only accolade voted for by the public.

Bloodstream – Ed Sheeran
Love Me Like You …read more

Gallagher: Beady Eye have split up