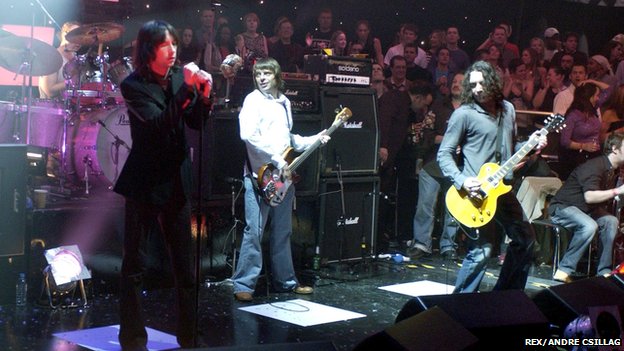 Robert Young (right) is pictured with Primal Scream in 2003, three years before he left the group

Robert “Throb” Young, the guitarist who helped Primal Scream to rock stardom in the 1990s, has died.

Young founded the band with school friend and singer Bobby Gillespie in Glasgow in 1984.

They hit the heights with psych-pop album Screamadelica in 1991, which included songs like Movin’ on Up and Loaded and won the first Mercury Prize.

Young left the group in 2006 to deal with what Gillespie described as “problems in his personal life”.

Author Irvine Welsh wrote: “RIP Robert Young. One of the best, the most beautiful, who WAS rock n roll. Big love bro, give them it big time over the other side. #Throb”

The Charlatans singer Tim Burgess wrote: “So sad to hear of the death of Rob ‘Throb’ Young… A real good un.”