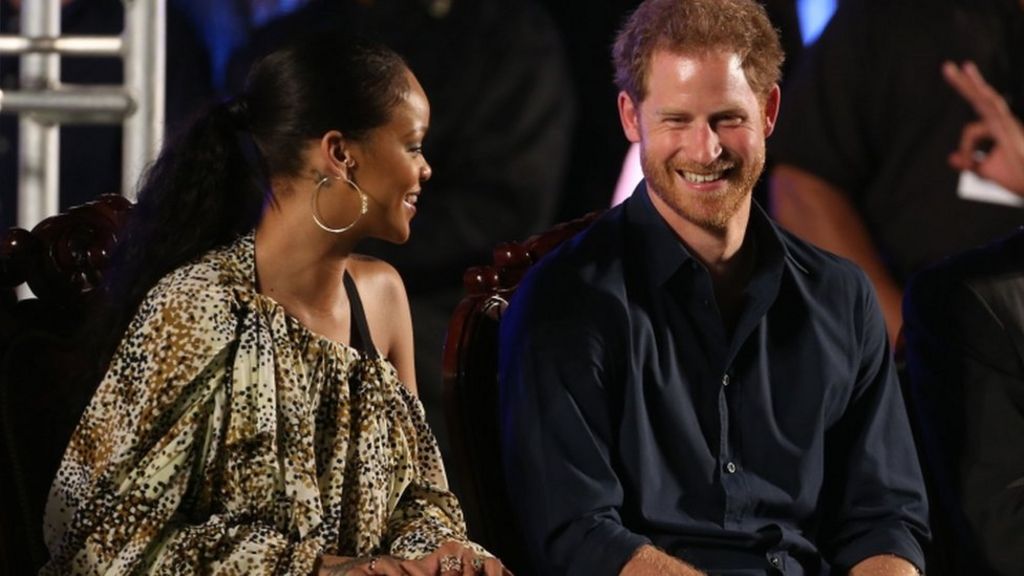 At an afternoon event in Bridgetown, Prince Harry kept the singer waiting as he stopped to greet the president of Guyana first, before turning to her.

Rihanna, who has had eight UK number ones and 29 UK top 10 hits, stood to greet the prince, who said: “Hello, it’s very nice to meet you.”

The pair later sat side-by-side on stage at a celebratory concert.

A senior royal aide said the prince, who wore his medals and his insignia as a Knight Commander of the Royal Victorian Order, had been told 20 minutes before he arrived at the afternoon gala that Rihanna would be there.

“We thought he would be meeting her for the first time at the concert,” he said.

Rihanna wore a blue dress and opted for striking yellow finger nails – both colours are on the Barbados flag.

Prince Harry read a message from the Queen to mark the anniversary of the moment – on 30 November 1966 – that the country broke away from British rule.

The Queen’s message to Barbados

Prince Philip and I send our warmest wishes to the Government and the people of Barbados on the occasion of your 50th Anniversary of Independence.

Since you became an independent country in 1966, you have continued to flourish and grow into a strong and confident nation.

The extraordinary talents of your people, from the cricket field to the music industry have been admired and recognised throughout the world. Barbados remains a favoured holiday destination for British people, not only for the incredible natural beauty of your country but because you have a great warmth and generosity of spirit.

Over the years I have visited Barbados five times and you have kindly welcomed many other members of my family.

Our countries have a shared history, shared values and an affection which continues to bind us in friendship. On this day of celebration, I send my congratulations to you on your Golden Jubilee of Independence.

Later, Prince Harry and Rihanna sat next to each other on stage at a concert at Kensington Oval cricket ground in Bridgetown.

The 20,000-strong crowd cheered and chanted Prince Harry’s name when he was introduced, prompting a smile from the royal.

But there was an even bigger response for Barbados-born Rihanna.

Prince Harry told the audience: “Your independence was a declaration of confidence in the future.