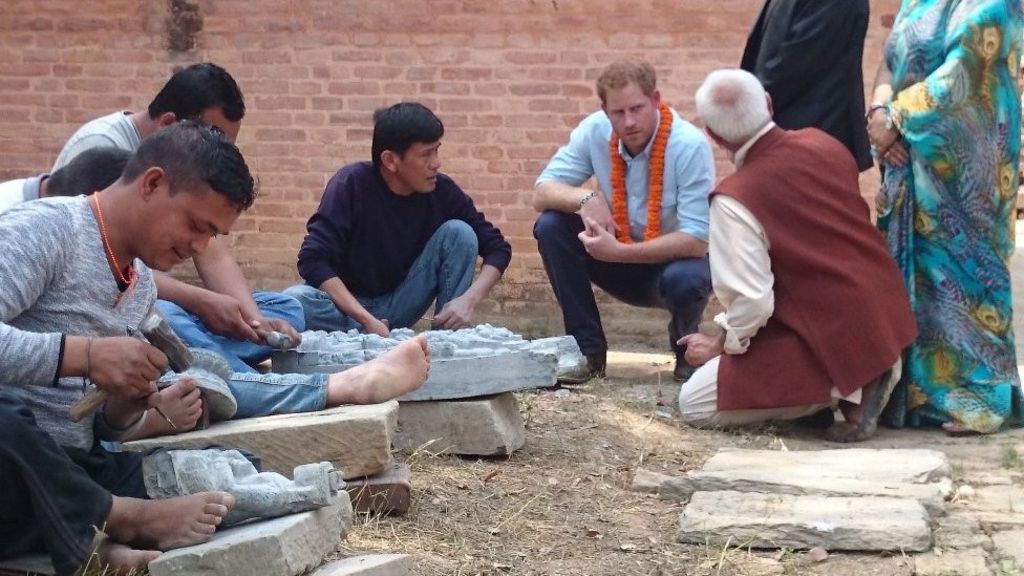 Prince Harry has visited sites damaged by April and May’s earthquakes in Nepal during the second day of his five-day trip to the country.

He arrived in Kathmandu on Saturday evening, and met the country’s president the next morning.

Prince Harry will meet survivors of the earthquakes – which killed nearly 9,000 people – as well as Gurkhas who helped the rescue efforts.

He praised the Nepalese people for what he called their “resolve and resilience” in the wake of the disaster.

He visited artisans and apprentices working to restore the royal palace at Patan Durbar Square, which was heavily damaged by the quake.

The Unesco World Heritage Site was among many damaged by the 7.8-magnitude earthquake on 25 April and the second tremor on 12 May.

He told her the flight was long, but “worth the hours to be in Nepal, finally”.

A Kensington Palace spokesman said: “The prince very much enjoyed his meeting with the president.”

“They had a wide-ranging and friendly conversation, covering earthquake recovery, the importance of tourism, conservation and climate change.”

The UK has been one of the largest bilateral donors to Nepal, with a total commitment of £70 million in earthquake relief, according to figures released by the Department for International Development (DFID).

That relief helped provide over 250,000 people with shelter in the past year, DFID said.

It is the prince’s first official visit to the country.

The trip is celebrating 200 years of joint relations between Nepal and Britain.

Prince Harry served with the Gurkhas in Afghanistan, as a soldier in the British Army, and will meet members of the brigade during his visit.

The Gurkhas – whose name comes from the Nepalese hill town of Gorkha – began joining the East India Company, and later the British army.

They have since served in every major conflict involving British forces for two centuries, and won 13 Victoria Crosses – the highest British military decoration for valour.

More than 200,000 Gurkhas fought in the two world wars, and there are about 2,600 Gurkhas currently in the British armed forces.

Man charged over death of boy in Middlesbrough...