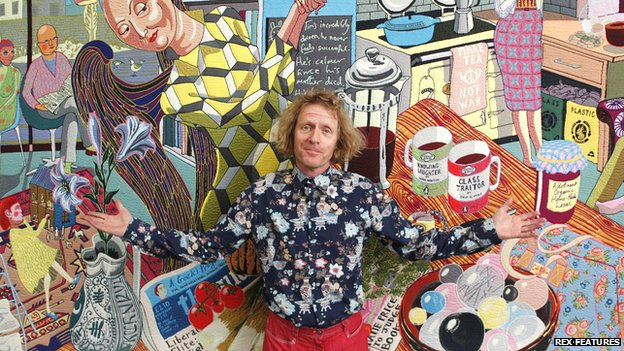 Disabled artists in Leeds are going up against Grayson Perry by staging their own exhibition in protest at the venue for his new show in the city.

Perry’s The Vanity of Small Differences is on display at Temple Newsam House, but the venue is not fully accessible.

So eight disabled artists are putting on their own rival textiles exhibition.

Organiser Gill Crawshaw said: “You might be putting the tapestries on in an ancient building, but you shouldn’t be thinking in an ancient way.”

The historic venue is owned by Leeds City Council, which admitted the accessibility was “not what we would wish it to be”.

A representative for the Turner Prize-winning artist said he was out of the country and not available for comment.

The “rival” exhibition, titled The Reality of Small Differences, opens at the Union 105 and Inkwell Arts venues on Saturday, the same day as Perry’s six large tapestries go on show at Temple Newsam House.

Ms Crawshaw said: “The main aim of the exhibition at first was a protest and to make a statement and say this is an outrageous decision to put the tapestries there.

“We wanted to highlight that that was discriminating against disabled people.

“However, it’s become something in its own right because disabled people are doing fantastic work and there are loads of artists out there making interesting work.”

A statement from Leeds City Council said: “Temple Newsam House is, by its nature, one of our most difficult venues in which to implement accessibility measures.