Protestors would like the opera to be removed from the schedule

Politicians including former New York Mayor Rudy Giuliani demonstrated outside the Metropolitan Opera on Monday over a controversial show.

John Adams’ opera The Death of Klinghoffer relates the murder of a disabled Jewish man killed by Palestinian gunmen in 1985.

Some critics have accused the work of glorifying terrorism and being anti-Semitic.

The Met denies these claims. The opera will run in New York until 15 November.

About 400 people stood behind barricades chanting: “Shame on the Met!” and carrying signs saying “The Met glorifies terrorism” before the first scheduled performance. 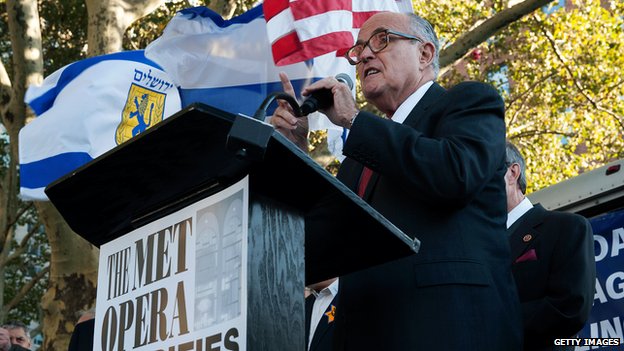 Rudy Giuliani left office at the end of 2001

Giuliani said he wanted to warn people the Klinghoffer opera “is a distorted work”.

“If you listen, you will see that the emotional context of the opera truly romanticises the terrorism… and romanticising terrorism has only made it a greater threat,” he said.

The demonstration is part of an on-going protest which began on 22 September when the Met’s season opened with a work by Mozart.

One placard at Monday’s protest read: “We pray for Leon Klinghoffer’s soul.”

The Met had originally planned to relay the revival – a co-production first seen in London in 2012 with the English National Opera – live to cinemas around the world.

But after Jewish groups argued the screenings would stoke anti-Semitism outside the US, the broadcasts were cancelled.

Binge-watch: Collins' Word of the Year