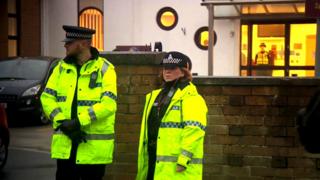 More than 1,000 pupils have not turned up to a school that received online death threats.

Threats to kill pupils in a shooting on Monday at Montgomery High School in Blackpool were posted on social media. The user said they planned to “kill as many people as possible.”

Police officers have been patrolling outside the school for “reassurance”, a police spokeswoman said.

Prisons overhaul to be unveiled by PM