The BBC’s Question Time has been criticised by the sister of Alice Gross after it featured a question relating to the murdered 14-year-old.

Latvian Arnis Zalkalns was named as a suspect by police before her body was found in the River Brent on Tuesday.

Alice was last seen on 28 August after leaving home in Hanwell, west London.

Nina Gross wrote on Twitter: “It is extremely insensitive to use my family’s tragedy for political agendas and discussion. This is a time of grief for our family. In future, please respect our wishes as we grieve. 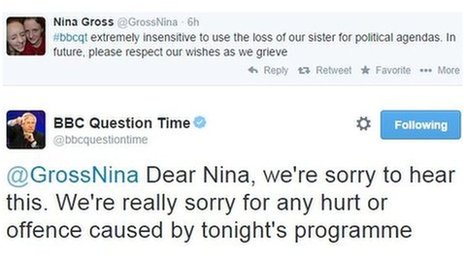 “This is a personal tragedy which we want to deal with privately, rather than fearing anyone using it for any political agenda.

“It is extremely insensitive to use my families tragedy for political agendas and discussion. This is a time of grief for our family.

“Now is not the time for these discussions.”

In later posts directed at BBC Twitter accounts, she added: “It is really insensitive and horrible that you have used our family’s tragedy on Question Time.”

A post from the show’s Twitter account said: “Dear Nina, we’re sorry to hear this. We’re really sorry for any hurt or offence caused by tonight’s programme.”

She replied: “Thank you.”

On the programme, presenter David Dimbleby said a question had been submitted to the panel referring to the “hideous murder of Alice Gross”.

The question was: “Should there be freedom of movement including convicted criminals across EU borders?” The discussion lasted about …read more

Alexandra Shulman: How her time at Vogue shaped...

Ed Sheeran denies Take That another number one...