Home News Rail fares to rise by average of 1.1%
News

Rail fares to rise by average of 1.1% 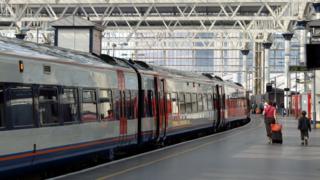 Rail fares to rise by average of 1.1% from 2 January

Rail fares will rise by an average of 1.1% from January 2, 2016, rail industry body the Rail Delivery Group (RDG) has announced.

The RDG, which represents train operators and Network Rail, said it was the smallest annual rise for six years.

Regulated rises are limited to no more than 1%, as they are linked to July’s Retail Price Index inflation rate.

Unregulated fares, such as off-peak leisure tickets, can go up by as much as the train companies like.

RDG chief Paul Plummer said: “We know that nobody likes to pay more to travel by train, especially to get to work.”

“This allows government to focus its funding on building a bigger, better network when the railway is becoming increasingly important at driving economic growth, underpinning jobs, and connecting friends and families,” Mr Plummer said.

Next week's junior doctor strike off

All new police officers in England and Wales...