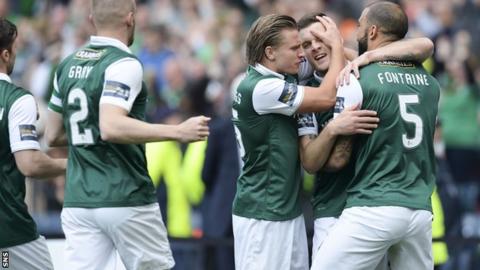 Anthony Stokes scored twice for Hibs, either side of goals from Kenny Miller and Andy Halliday.

Then Gray headed in the winner before Hibs celebrated a timeless triumph.

Hibs fans spilled onto the pitch in their thousands after the final whistle, with some running towards the Rangers end, where pockets of supporters broke to confront them.

Players and match officials were caught up in the pitch invasion, which eventually saw mounted police enter the pitch.

Both sides had to leave the field, with Rangers given their medals in the dressing room and Hibs waiting for the pitch to be cleared before they could emerge to collect the trophy.

The Hibs players had began as though the manager’s instructions were constantly ringing in their ears. The strategy was that the three centre-backs would stifle the corridors of space that Rangers look to exploit in attack, while heavy pressing would disrupt the rhythm of Mark Warburton’s side.

The planning would have been meticulous, but an immediate advantage would not have been anticipated. There was a committed intent that enthused Hibs’ play. It was evident in the way that Stokes clattered into Jason Holt in the first minute, but also in the way the striker drove into the Rangers penalty area before expertly placing a shot beyond Wes Foderingham.

Rangers’ players were immediately subdued, although some might have been feeling an element of culpability. Halliday and James Tavernier had failed to win the ball from John McGinn, while Rob Kiernan allowed Stokes the time and space to measure his options.

Stokes naturally tends to drift out to the left, but the instinct would have been encouraged by Stubbs since the space between Tavernier …read more