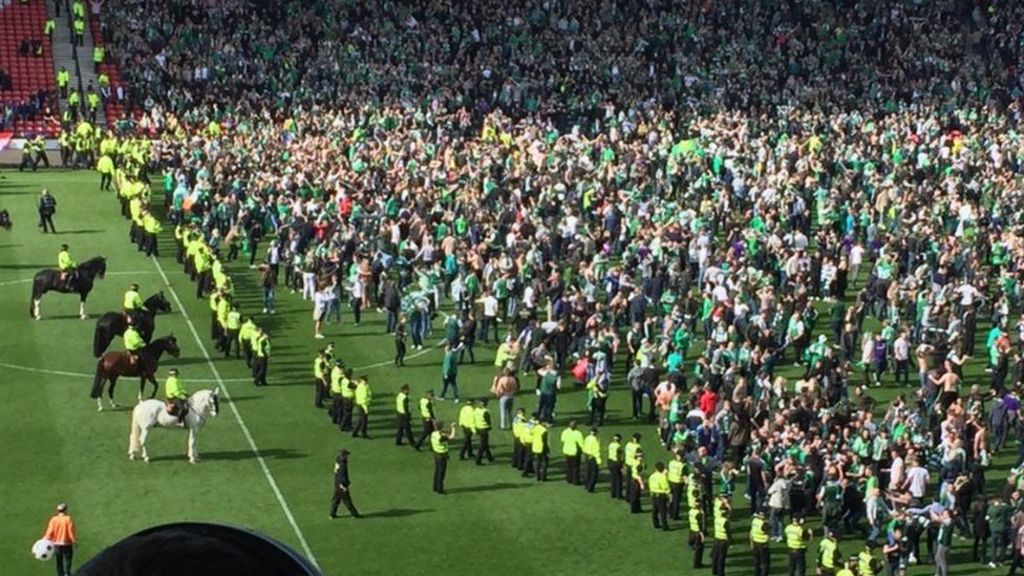 Rangers have demanded an independent investigation into the “shameful scenes” at the Scottish Cup final.

A statement from the club says Rangers FC players and backroom staff were physically and verbally assaulted when Hibernian fans invaded the pitch at the end of Saturday’s game.

The club said it was “incomprehensible” that no-one from the Scottish FA or Hibernian had condemned the violence.

It also hit out at Nicola Sturgeon for not condemning Hibs fans.

The statement accused the football authorities of trying to “gloss over” the incident.

The Edinburgh club’s first cup win since 1902 was marred by thousands of fans invading the pitch at full-time.

The police brought horses on to the Hampden pitch to control the crowds, including a section from the Rangers end of the ground.

The pitch invasion delayed the presentation of the trophy and there was no lap of honour for Hibs players.

Rangers players were not able to pick up their cup final medals.

A Rangers statement on Sunday evening said: “We have not even had the courtesy of any contact whatsoever from Hibernian to ask after the wellbeing of those who were attacked by their club’s supporters.”

It continued: “What unfolded on Saturday cannot and must not be put down to exuberance. That is a complete insult to Rangers, our supporters, and those individuals who were intimidated and attacked.”

The Rangers statement goes on to condemn the failure of the Scottish FA’s “inadequate” security arrangements.

The Glasgow club acknowledged that a “tiny minority” of their supporters encroached on to the pitch but said this was after “prolonged and severe provocation and in order to protect our players and officials who were being visibly attacked in front of them”.

Rangers added: “It is to be hoped that all of Scottish football will share Rangers’ disgust and …read more