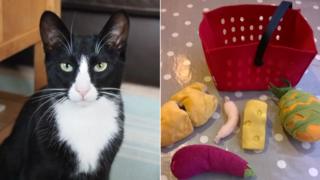 Theo the cat and his haul of toy foodstuffs

A pet cat with a track record for stealing has slipped back into his criminal ways despite convincing his owner he was a reformed character.

Kleptomaniac Theo, from Ipswich, first hit the headlines in 2013 for stealing Christmas decorations.

Recently he has been stealing toy food, including a pineapple and an aubergine.

“We are deeply ashamed of our cat, especially as he had convinced us that he had changed his criminal ways,” his owner wrote to neighbours.

Rachael Drouet created a leaflet which she distributed …read more

Amputee to be father after septicaemia ordeal