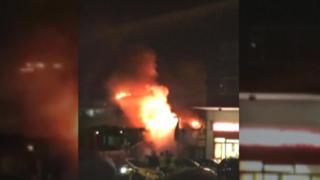 From the section Stoke & Staffordshire

Residents were evacuated from their homes after a fire at a disused pub.

Staffordshire Fire and Rescue Service said it was called to The West Way, in Stafford, at about 18:45 GMT on 7 December.

Firefighters are still at the scene, and police officers have set a 200m cordon around the fire.

Evacuated families have not yet returned to their homes, while residents in nearby properties are urged to keep doors and windows closed.

No pay-out for double murderer tip-off