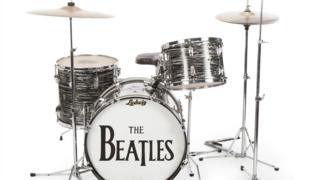 A drum kit played by Ringo Starr on Beatles hits including Can’t Buy Me Love and I Want to Hold Your Hand has sold at auction for $2.1m (£1.4m).

Starr used the Ludwig kit in more than 200 performances after taking possession of it on 12 May, 1963.

Last month, Julien’s Auctions sold a drum head from a kit Starr played on US television show The Ed Sullivan Show in 1964, also for $2.1m.

The ex-Beatles drummer has put several memorabilia items up for sale.

Also available is a guitar used by John Lennon, which he gave to Starr in 1968, some of the drummer’s signature rings and his own copy of The Beatles’ White Album, marked as number 0000001.

Part of the sale proceeds will go to the Lotus Foundation, founded by Starr and his wife Barbara Bach, which funds and promotes charitable projects aimed at advancing social welfare.

According to …read more

Beatles' first contract up for sale