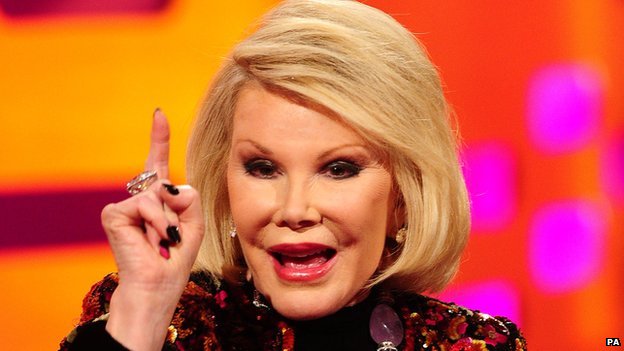 US comedienne Joan Rivers is “resting comfortably” and with her family after reportedly going into cardiac arrest during surgery on her vocal chords.

“We ask that you continue to keep her in your thoughts and prayers,” said the 81-year-old’s daughter Melissa.

Rivers was taken ill on Thursday at an outpatient centre in the Yorkville neighbourhood of Manhattan.

The comic is understood to have stopped breathing during surgery and was rushed to Mount Sinai Hospital in New York.

According to unconfirmed reports, the performer’s heart had stopped beating during the procedure.

Before being admitted to hospital, Rivers had been due to appear on Friday at a theatre in Red Bank, New Jersey.

The veteran performer and outspoken fashion critic has won both fans and detractors with her acerbic remarks and waspish sideswipes at the rich and famous.

News of her condition prompted a deluge of get well wishes from members of that community, among them Star Trek actor Zachary Quinto and singer Courtney Love.

“I want to thank everyone for the overwhelming love and support for my mother,” said Melissa Rivers in a statement.

Dame Helen Mirren to appear in Fast and...