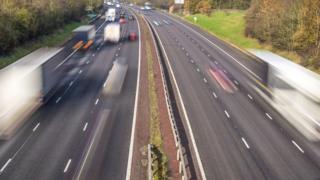 Millions of drivers will hit the roads during the festive period

Nearly 400 miles of roadworks are to be removed in preparation for one of busiest days on the roads for motorists, Highways England has said.

A total of 148 schemes will be removed by 06:00 GMT on Wednesday in an effort to free up motorways and A-roads.

Wednesday along with 30 December will be peak travel days, Abta said.

David Cameron to quit as Tory MP for...

RMT and FGW in talks to avert strike