Round the Island Race: New record set despite strong winds 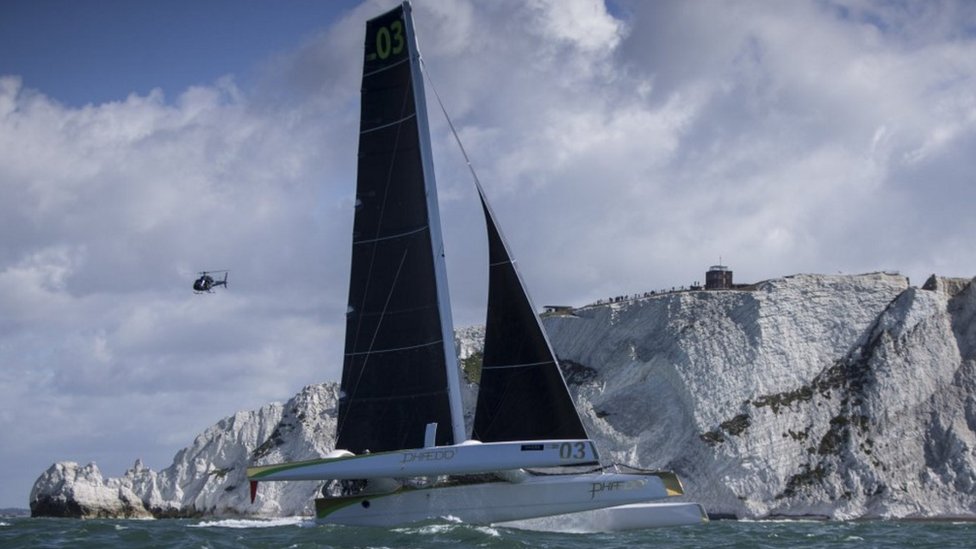 A new record has been set in one of the world’s largest yacht races, taking place around the Isle of Wight.

Organisers of the 85th Round the Island Race said “stronger than expected” offshore winds had led to the cancellation of some classes.

The previous record was set by Olympic champion Sir Ben Ainslie in 2013.

He completed the course in two hours and 52 minutes – dedicating his achievement to fellow Olympic sailor Andrew Simpson who died in 2013.

The one-day race is believed to be the fourth largest participation sporting event in the UK after the London Marathon and the Great North and South Runs.

According to BBC Weather, a force 4-6 westerly breeze was forecast for Saturday’s race.

The coastguard said several boats were unable to take part due to the conditions, and others had to pull out during the event due to “lost rigging”.

Meanwhile, one ship lost its mast and a 38-year-old man suffered minor head injuries after being hit by the boom of another vessel.

“Regrettably, what appear to be near perfect conditions on land are not as favourable offshore, especially for smaller, less stable boats,” JP Morgan Asset Management Round the Island Race said in a statement.

Dave Atkinson, from the management team, said: ‘We are currently experiencing winds of over 45k at the back of the island and we consider it unsafe to send these classes.

“Although the wind is due to abate we are still expecting gusty squalls to come through, with associated higher winds.”

More than 1,500 boats registered to take part in the race, which starts and ends at Cowes and attracts about 16,000 sailors from across the UK, Europe and the US.