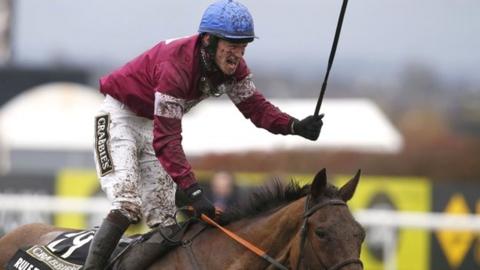 The 33-1 shot Rule The World, ridden by 19-year-old David Mullins and trained by Mouse Morris, has won the 2016 Grand National at Aintree.

Mullins, in his first ride in the race, came storming through to overhaul The Last Samuri (8-1 joint favourite) and Vics Canvas (100-1) late on.

Last year’s winner Many Clouds challenged but was beaten a long way out and finished 16th and last.

The nine-year-old winner, owned by the Gigginstown House Stud headed by airline boss Michael O’Leary, had never claimed a victory over fences before.

And it was a sweet success for all concerned, including Morris, who has had a difficult 12 months after his son Christopher died in an accident in Argentina last summer.

“This is just magic,” he told BBC Radio 5 live afterwards. “I’ve got great friends who stood by me and helped.

“I’d have settled for third at the Elbow but he ran on like a train. He has broken his pelvis in two falls and before that he was one of the best horses I ever had.”