Jonathan Pryce and other original cast members of Miss Saigon have joined its new cast on stage at a gala performance marking the musical’s 25th anniversary.

“Matron said I’d enjoy it!” joked Pryce, now 67, after performing one of the songs he first sang in 1989 in the inaugural Cameron Mackintosh staging.

Lea Salonga and Simon Bowman, the first to play Kim and Chris, also sang during a special post-show encore.

Afterwards, Salonga said the audience response had been “deafening”.

“We expected a big hand but nothing like this,” said the Manila-born actress, now 43. “I was trying to keep it all together.”

Written by Les Miserables duo Claude-Michel Schönberg and Alain Boublil, the original production of Miss Saigon opened at the Theatre Royal Drury Lane in September 1989 and ran for 10 years.

A reworked production of the show, which tells of an American GI and a Vietnamese girl who begin an ill-fated romance amid the fall of Saigon in April 1975, returned to the West End earlier this year. 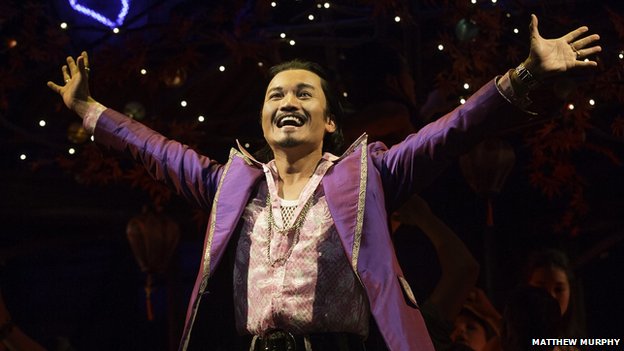 “We never thought we’d get the chance to do it all over again,” Sir Cameron Mackintosh told a sell-out audience that included actor and broadcaster Michael Ball and Strictly Come Dancing judge Craig Revel Horwood.

The original show provoked a storm of controversy for casting Welshman Pryce as ‘The Engineer’, the sleazy half-Vietnamese pimp who helps bring Kim and Chris together.