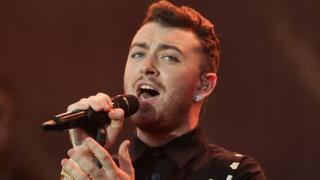 Sam Smith’s Writing’s On The Wall has made history by becoming the first Bond theme to reach number one in the UK.

The track achieved combined chart sales and streams of 70,000 copies – 13,000 ahead of its closest competitor, Justin Bieber’s What Do You Mean?

The previous highest-charting Bond themes were Adele’s Skyfall and Duran Duran’s View To A Kill, which both reached number two.

Smith said he was “so proud” of …read more