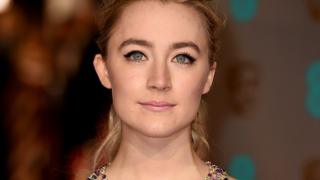 Saoirse Ronan previously featured in another Ian McEwan film adaptation, 2007’s Atonement, for which she was nominated for the best supporting actress Oscar

Oscar-nominated actress Saoirse Ronan is to star in a movie version of the bestselling novel On Chesil Beach.

The 2007 Booker Prize shortlisted novel by Ian McEwan is set in 1962 and tells the story of young newly-weds on honeymoon on the Dorset coast.

Ronan – up for the best actress Oscar for Brooklyn – will play the young wife Florence but her co-star, playing her husband Edward, is yet to be announced.

The film will be Ronan’s second McEwan adaptation after 2007’s Atonement.

She was up for best supporting actress for playing the little Briony Tallis whose misunderstanding of a situation she unwittingly witnesses leads to the tragic events that drive the story on.

On Chesil Beach will be led by the theatre director Dominic Cooke, who was formerly the artistic director of London’s Royal Court theatre.