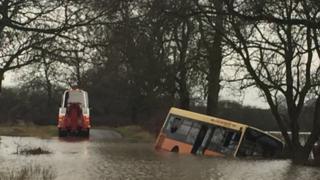 School children trapped in bus by flood water near York

From the section York & North Yorkshire

All the school children on the bus were unharmed

Nearly 30 school children had to be rescued from a bus after it became stuck in flood water near York.

North Yorkshire Fire and Rescue said crews helped 26 children off the vehicle and on to another bus.

None of the children were injured and the school and bus company were working with police to inform parents.

The bus is believed to have been travelling between the villages of Newton-on-Ouse and Tollerton when it became stuck.

House prices 'expected to fall' in the short...