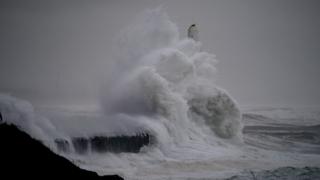 Jamie Stewart took this image of waves in Aberdeen harbour

Warnings of high rivers and large coastal waves have been issued as persistent wind and rain batter parts of Scotland.

The Met Office has amber “be prepared” warnings for Moray, Aberdeenshire, Angus, Perthshire and Stirlingshire.

The police in Tayside have warned that many roads are closed and affected by rising water across the region.

The warnings, which mean flooding is expected, are mostly for the Tayside, Angus, and Dundee areas, as …read more