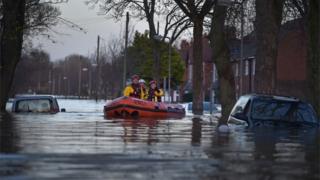 Schools and hospital services have been closed in parts of northern England as emergency services continue to battle against the effects of Storm Desmond.

Thousands of homes in Cumbria are still without power while the Army spent a second day evacuating people across Carlisle, Keswick and Appleby.

Heavy rain and winds subsided on Sunday, but more “persistent” downfalls have been forecast later in the week.

David Cameron said everything was being done to prevent further damage.

The prime minister is due …read more

Man dies after attack by own dog

Brexit: Government 'to stand up' for Gibraltar's interests