A huge, green, inflatable sculpture on a famous Paris square has raised a storm for its resemblance to a sex toy, with the artist attacked in the street.

US artist Paul McCarthy told French newspaper Le Monde that his work entitled Tree had been inspired both by a sex toy and a Christmas tree.

When he went to see it on Place Vendome, a man slapped his face before running away, the paper says.

But social media is crackling with jokes about the 24m (79ft) inflatable.

McCarthy, 69, whose previous installations have shocked viewers in the Netherlands and Switzerland, told Le Monde in an interview (in French) that Tree was an “abstract work” rooted in a joke about a sex toy. 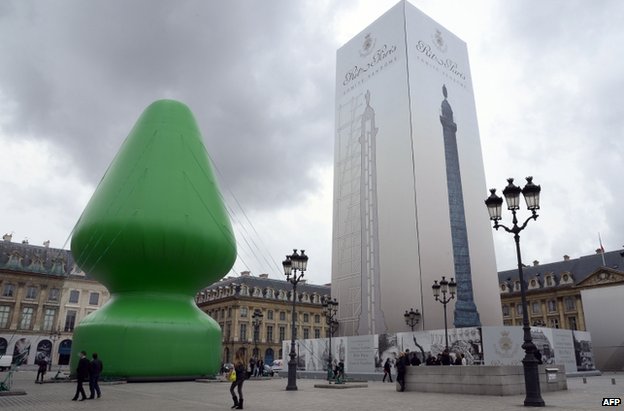 The new sculpture stands near the Vendome Column

The stranger, who slapped him three times, shouted that he was not French and that his work had “no business being on the square”, the paper writes.

Unhurt but shocked by the assault, McCarthy asked: “Does this kind of thing happen often in France?”

The attack was condemned by bloggers on social media, as “Vendome” continued to trend on French Twitter on Friday, the day after Tree was installed.

“You have to be really dumb to attack the artist Paul McCarthy for his work on Place Vendome, whether you like it or not,” wrote one.

The square with its towering Column, Napoleon’s monument to the Battle of Austerlitz (closed until next year for restoration), is famous for its luxury hotels such as the Ritz.