A compilation of Shakespeare’s stage plays, the Folio is the only known source for 18 of his works

A rare and valuable Shakespeare First Folio, regarded as the most important book in English literature, has been discovered in a small French town.

The book had lain undisturbed in a library in Saint-Omer, near Calais in northern France, for 200 years.

It was discovered by librarians planning an exhibition on the historic links between the region and England.

“The work has several pages missing, including the title page,” librarian Remy Cordonnier told the press.

The loss of the first page and introductory material may have led to the book being catalogued as an unexceptional old edition, he added.

The Folio collects 36 of Shakespeare’s 38 known plays for the first time, and was originally printed in 1623, seven years after the playwright’s death.

Edited by his friends and fellow actors John Heminges and Henry Condell, it is credited with being the reason his literary legacy survived. It is the only source for 18 of his plays, including Macbeth. 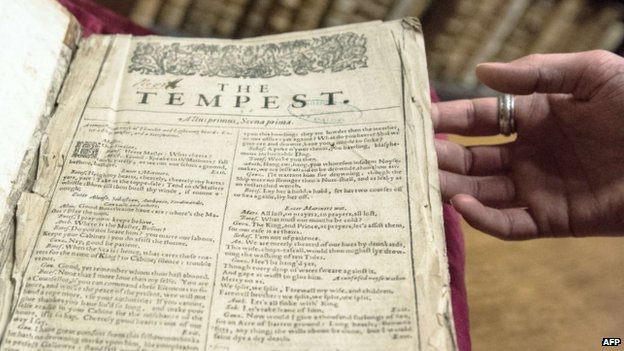 It is thought that 800 copies were produced, of which 233 are believed to still exist.

New discoveries are made roughly once a decade, and they are scrutinised by scholars for minor variations (each copy is different) and what they might reveal about Shakespeare’s intentions.

The copy discovered in Saint-Omer is only one of two known to reside in France.

Mr Cordonnier, who runs the library’s rare books collection, said he had not initially realised the significance …read more