Stonyhurst College holds a different copy of the Folio in Lancashire

A rare book of Shakespeare plays found in a French town was “left behind” when a school now based in Lancashire was expelled from the area, it is claimed.

The Shakespeare First Folio, said to be the most important book in English literature, lay in a library in Saint-Omer, near Calais, for 200 years.

Clitheroe’s Stonyhurst College began as St Omers College there in 1593.

A spokeswoman said the “dog-eared” book must have been “overlooked” when the college was ordered to leave in 1762.

The Folio collects 36 of Shakespeare’s 38 known plays for the first time, and was originally printed in 1623, seven years after the playwright’s death.

The rare copy was discovered by librarians planning an exhibition on the historic links between the Calais region and England.

The region was home to St Omers College, founded by Jesuit priests to provide a Catholic education for English boys which, at the time, was banned across the Channel.

The spokeswoman said it was “renowned for its drama productions [which] drew large crowds”.

As a result, she said it was “not surprising” for a “well used” copy of the Folio to be part of its library.

The Folio contains several handwritten notes, which may show how the plays were performed in Shakespeare’s time.

In one scene from Henry IV, the word “hostess” is changed to “host” and “wench” to “fellow” – possibly reflecting an early performance where a female character was turned into a male. 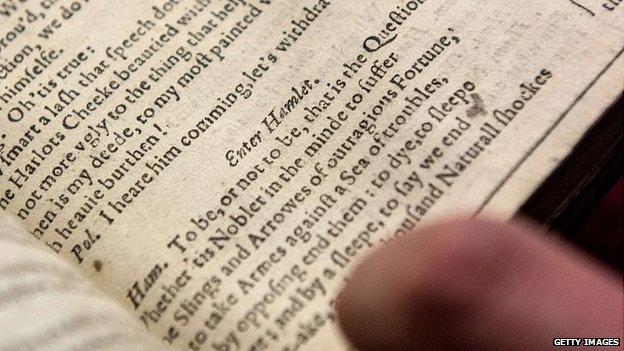