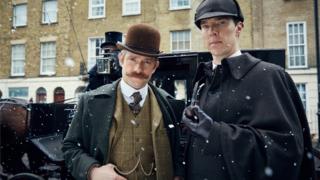 The Abominable Bride – which starred Benedict Cumberbatch and Martin Freeman as Sherlock Holmes and Dr Watson – attracted 34.7% of the TV audience.

The final episode of ITV drama Downton Abbey won the Christmas Day ratings battle with an average of 6.6m viewers.

Sherlock attracted 8.4m viewers, the highest overnight audience across all channels for a drama of the festive season, the BBC said.

Clive James to be honoured by Bafta