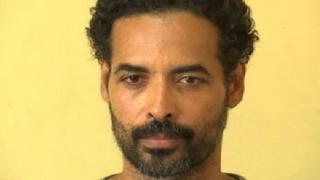 Arthur Simpson-Kent was brought before the Criminal Investigation HQ in Accra, Ghana

The partner of EastEnders actress Sian Blake, whose body was found in their garden, is to be flown back from Ghana to the UK later, prosecutors have said.

Arthur Simpson-Kent left the UK on 19 December after the deaths of Ms Blake, 43, and their two young sons, Zachary, aged eight and Amon, aged four.

Their bodies were found buried in the garden of their family home in Erith, south London, on 5 January.

Mr Simpson-Kent is due at Westminster Magistrates’ Court on Friday.

Ms Blake, who played Frankie Pierre in 56 episodes of EastEnders in 1996 and 1997, died from neck and head injuries, post-mortem tests found. She had been suffering from motor neurone disease.