Singer and songwriter Lynsey de Paul has died at the age of 64, following a suspected brain haemorrhage.

De Paul, who represented the UK in the 1977 Eurovision Song Contest with the song Rock Bottom, had five top 20 UK chart hits, including 1972’s Sugar Me.

She became the first woman to win an Ivor Novello award for songwriting.

“Although she was small in stature, she was very big in positive personality,” said her agent Michael Joyce. “She was always so positive about everything.”

“Sad news of Lynsey De Paul, beautiful and talented singer/songwriter,” tweeted actor John Challis, best known as Boycie in Only Fools and Horses. “Storm in a Teacup, one of my favourite songs.”

Her sense of humour informed her close friendship with Spike Milligan, who reportedly nicknamed the diminutive star ‘Looney De Small’. 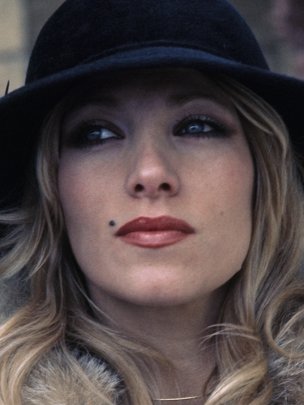 De Paul had a long relationship with actor James Coburn

De Paul, who broke into the music scene in 1971, followed up her Sugar Me hit with Getting a Drag, reaching number 18 in the charts.

Her 1973 hit Won’t Somebody Dance With Me won her her first Ivor Novello award.

A second Ivor Novello Award followed a year later for No Honestly, which was also the theme tune to the ITV comedy of the same name, starring Pauline Collins and John Alderton.

She also wrote the theme to Esther Rantzen’s BBC One series Hearts Of Gold.

Paying tribute, Rantzen, who fronted the show, called her “a renaissance woman”.