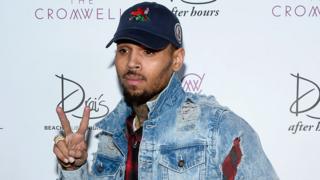 Brown had performed at a Las Vegas nightclub on Friday

US singer Chris Brown is being investigated by Las Vegas police over an allegation of battery.

Officers were contacted at 10:30 local time (18:30 GMT) on Saturday about the alleged incident at the Palms Casino resort, according to Lt Jeff Goodwin.

A police statement said an altercation took place in a room when a woman went to take a picture of Brown and was struck by him before he took her phone.