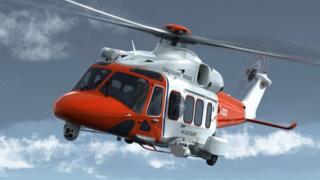 Coastguard helicopters – like the one pictured – were sent to the vessel

A cargo ship is being towed to port after it began taking on water and sinking while under way in the English Channel, the coastguard has said.

The EMS Majestic, which is registered in Antigua and Barbuda, issued a Mayday call from its position in the Dover Strait just after 19:00 GMT on Sunday.

A number of ships in the area responded to the sinking vessel, according to the Maritime and Coastguard Agency.

Complaints about Vodafone rocket in UK