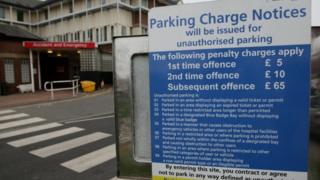 Some hospital trusts make millions a year from car parks

Some hospital trusts in England are making more than £3m a year from car parking fees, Freedom of Information (FOI) requests have shown.

Of more than 90 trusts that responded to FOI requests, half are making at least £1m a year, the news agency Press Association (PA) found.

The Patients Association said the charges were “morally wrong”.

But many trusts defended their revenues, saying some or all of the money was put back into patient care.

Apology over 'do not resuscitate' order

Toddler dies after choking on grape