Composer Stephen Sondheim has helped to launch a new London staging of his 1990 musical Assassins, calling it “entirely different” from previous productions.

Catherine Tate appears in the Menier Chocolate Factory’s revival, which explores the lives of people who have tried to kill the US president.

Sondheim, 84, said his musical had been “reconceived” for the Menier’s space, which had helped to “keep it fresh”.

One critic has called the result “fast, furious and fantastically off-kilter”.

“Assassins has to be the most swaggeringly badass show in town,” wrote Metro’s Patricia Nicol in her five-star review.

“No one is firing with blanks in this spellbindingly on-song ensemble,” she went on to say of a cast that includes The History Boys’ Jamie Parker and Mike McShane of Whose Line Is It Anyway? fame.

“Form and content are seamlessly integrated in an astonishing, audacious and courageous show,” the reviewer continued. 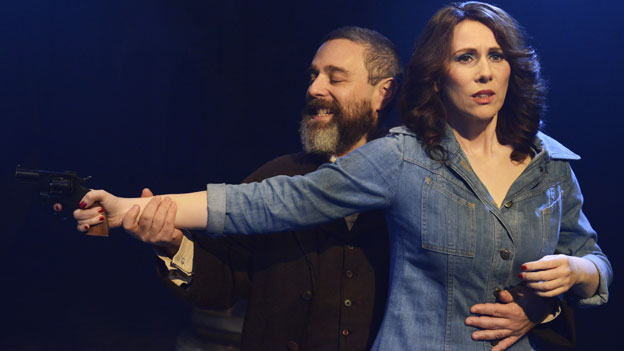 The production, wrote Holly Williams in The Independent, “pitches its audience into a zanily macabre funfair, the traverse stage littered with clapped-out bumper cars and a giant clown’s head”.

Yet the musical, first staged in London in 1992, drew more qualified praise from Quentin Letts in the Daily Mail.

Only Fools and Horses producer dies