Hackers had threatened to cinemas across the US

The New York premiere of The Interview, a comedy about the assassination of North Korea’s president, has been cancelled amid threats from hackers.

A spokesman for the cinema chain due to host the screening said it had been shelved.

They belong to the same group which has released emails and data stolen from Sony.

Calling themselves Guardians of Peace, the hackers mentioned the 9/11 attacks in a recent warning, claiming “the world will be full of fear”.

“Remember the 11th of September 2001. We recommend you to keep yourself distant from the places at that time,” the hacker group wrote in a message on Tuesday. 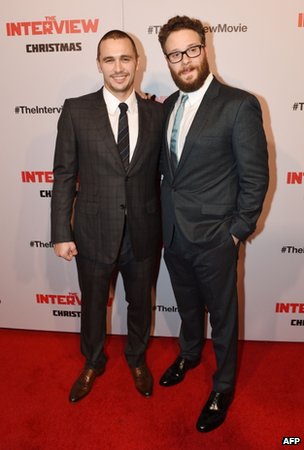 “If your house is nearby, you’d better leave,” they add. “Whatever comes in the coming days is called by the greed of Sony Pictures Entertainment.”

A spokesman for Landmark, the cinema chain due to host the New York premiere, confirmed the showing had been cancelled but gave no reason, Reuters news agency reported.

Executives from Sony had previously said they would not object if cinemas chose not to show The Interview.

Carmike Cinemas, which operates 278 venues across the country, has cancelled planned screenings, according to several news outlets.

The company has not yet commented publicly on the reports.

Guardians of Peace have also released a new trove of Sony company data, calling it a “Christmas gift”.

Ariana Grande is 'sued for music copyright' over...