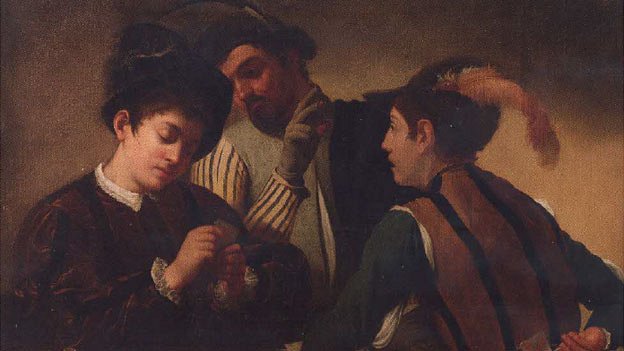 A painting sold by Sotheby’s in London for £42,000 is at the centre of a legal battle amid claims that it could actually be the work of Italian baroque master Caravaggio and worth up to £11m.

Former owner Bill Thwaytes, of Penrith in Cumbria, has accused the auction house of “professional negligence”.

When it was sold in 2006, it was attributed to a follower of the artist.

Mr Thwaytes said more should have been done to determine whether it was by Caravaggio, who died in 1610.

The oil painting The Cardsharps depicts a wealthy man falling victim to two cheats at a card table.

In 2006, Mr Thwaytes asked Sotheby’s to value the work and the auction house concluded that the painting was one of several copies made of the original, which is on display at the Kimbell Art Museum in Fort Worth, Texas.

In the 1950s, the Thwaytes family sold a genuine Caravaggio, The Musicians, to the Metropolitan Museum of Art in New York. Mr Thwaytes suspected his version of The Cardsharps was also likely to be authentic.

But Sotheby’s decided the copy was not created by the Italian master himself and attributed it to a 17th Century follower.

The painting was sold for £42,000. But its new owner – a British collector – has declared it to be by Caravaggio and worth millions.

Speaking at the High Court in London on Monday, Henry Legge QC, for Mr Thwaytes, said the issue was not whether it could be proved on the balance of probabilities that the painting was by Caravaggio.

Eurovision: Ireland and Portugal out