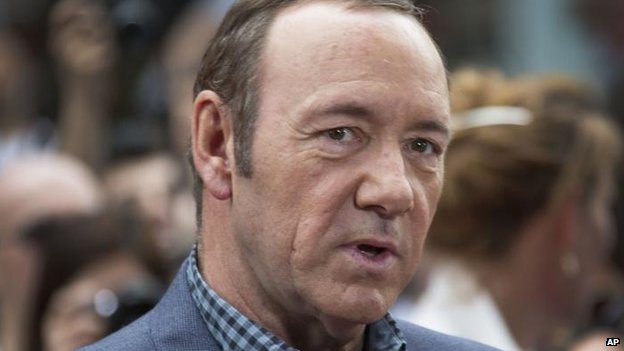 A woman who engaged in a “persistent and malevolent” cyberstalking campaign against actor Kevin Spacey has been sentenced to four years in prison.

Linda Louise Culkin, 55, threatened to cause physical harm to the House of Cards star.

Spacey said it was “difficult to measure the degree of terror” caused.

The 55-year-old actor was not present in the US District Court in Boston but his victim impact statement was read out in court.

Responding, Culkin apologised for her actions: “I have some mental health issues,” she said. “I was overzealous. I cop to that. I fully apologise to him. I didn’t mean it to be so harsh.”

Culkin was arrested in January 2012. Her apartment, in the town of Quincy, Massachusetts was reported to have images of Spacey with his eyes blacked out and numerous copies of a page entitled ‘Killing Kevin Spacey’.

The judge ordered her to pay Spacey $124,000 (£75,000) to compensate him for the bodyguards he hired during the two-year stretch when she harassed him.

Given the time already spent in prison following her arrest, Culkin has approximately 18 months left of her four-year sentence.

Spacey is best known for his Oscar-winning roles in The Usual Suspects and American Beauty and he was recently nominated for outstanding lead actor in a drama series at the 2014 Emmy Awards, for his role as Francis Underwood in the Netflix remake of House of Cards.

The actor has been artistic director of London’s Old Vic Theatre since 2004. He is stepping down next year.

This entry passed through the Full-Text RSS service – …read more