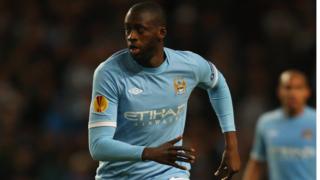 From the section Stoke & Staffordshire

Toure was recorded speeding at more than 100mph on the M6

Manchester City footballer Yaya Toure has escaped a driving ban despite admitting speeding up to 101mph on a motorway in a turbo-charged Porsche.

The 32-year-old Ivory Coast international drove at excessive speed on a northbound stretch of the M6 near Keele services on 20 May.

Toure was fined, ordered to pay costs, and given six penalty points at Burton Magistrates’ Court in Staffordshire.

Prosecutors dropped a more serious allegation of speeding at 123mph.