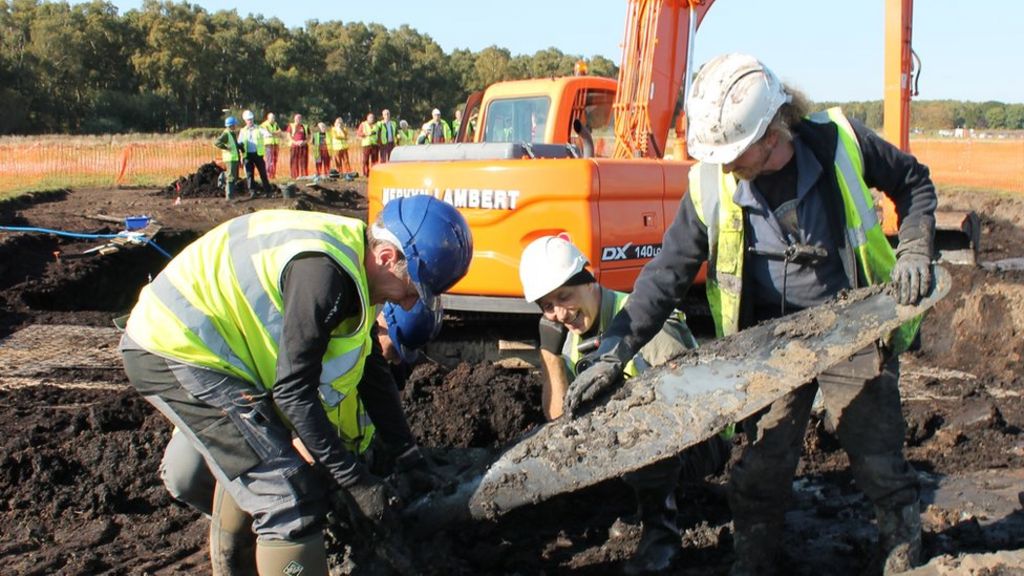 The excavation of a Spitfire from its wartime crash site has set the standard for future aviation digs, England’s historic environment body has said.

Historic England said involving forces veterans in the dig made it “an exemplar for future such endeavours”.

Veteran Gary Phillips, 57, who suffers from PTSD, said it was “like therapy” because he helped a fellow soldier.

A team from Oxford Archaeology East worked with veterans and service personnel to excavate the Spitfire in October, during which some of the pilot’s remains were discovered.

Mr Phillips, who is from Liverpool, said: “It’s like a fellow soldier and we’re going to help him – he served his country and died doing it and I lost friends doing the same.”

He served with the King’s Regiment during the 1970s and 1980s, including tours of Northern Ireland.

Two years ago he approached the veterans’ mental health charity Combat Stress for help with post-traumatic stress disorder, and said “in our day, PTSD wasn’t accepted”.

The former rifleman was told about Operation Nightingale, which is a military-run Defence Archaeology Group project using archaeology to aid the recovery of service personnel and veterans injured in conflict.

He said: “It’s like therapy – sometimes I can’t go out of the house and that has lost me jobs, but this is bringing me out of my shell.”

Diarmaid Walshe co-founded Nightingale after he identified “a growing need for some form of occupational therapy and recovery” for injured personnel.

The Royal Medical Corps sergeant said: “Military personnel are very good at digging holes, at working in adverse conditions, as part of a team and to tight deadlines.

“Plus the more physical skills are relevant to archaeology too – spotting colour changes in the soil, writing proper reports and observing small details.”

Archaeologist Stephen Macaulay said the “specific skills” of the military were “incredibly useful” on the dig.

The senior project manager added: “They saw him as ‘one of us’ and we had never worked on a dig with that sort of personal connection.”

Sgt Walshe said: “We hope that it brings comfort to Pilot Officer Hesketh’s family that his death has brought some benefit to another human being.”

Dozens of 999 calls from Sports Direct