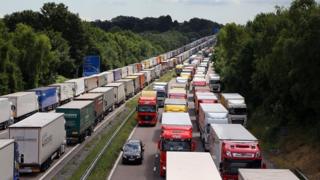 Two potential sites for a lorry park to deal with disruption on the M20 motorway in Kent have been revealed.

Either site would help prevent the need for Operation Stack, when the motorway is closed during cross-channel disruption, Highways England (HE) said.

Both sites are to the north of the M20 at junction 11, close to Westenhanger, and would ease Eurotunnel and Dover port disruption, HE said.

PM observes 'coming together' after Brexit in Easter...