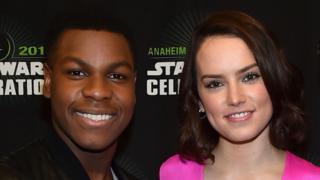 Boyega and Ridley are both 23 and both hail from London

The British stars of the new Star Wars film have told the BBC they feel “no pressure” over how it will be received.

“I feel no pressure at all,” said John Boyega, who will be seen in the JJ Abrams-directed Star Wars: The Force Awakens as a stormtrooper called Finn.

Smith: I'd love to take Funny Girl to Broadway