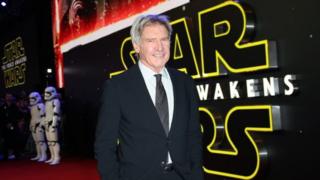 The production company behind Star Wars: The Force Awakens is being prosecuted over the accident in which Harrison Ford broke his leg.

The actor was struck by a hydraulic metal door on the Pinewood set of the Millennium Falcon in June 2014.

The Health And Safety Executive has brought four criminal charges against Foodles Production (UK) Ltd – a subsidiary of Disney.

Following the accident, Ford was airlifted to hospital for surgery.