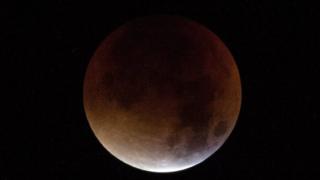 From the section Science & Environment

People around the world are watching the skies to observe a rare celestial event, as a lunar eclipse coincides with a so-called “supermoon”.

A supermoon occurs when the Moon is in the closest part of its orbit to Earth, meaning it appears larger in the sky.

The eclipse – which made the Moon appear red – should be visible in North America, South America, West Africa and Western Europe.